Projected Capacitive Touch Technology (PCT or PCAP ) is fast becoming one of the most prevalent touch technologies for an expanding variety of applications ranging from consumer devices to commercial applications in retail, gaming and signage. Driven by the increasing number of users of touch-enabled mobile devices, consumer and professional expectations for touch applications have moved far beyond single touch requirements into the realm of multi-touch and multi-user capabilities. Projected capacitive touch offers many great advantages over the more traditional touch technologies. There is a reason why Apple chose PCAP touch technology for their iPhones.

Projected capacitive technologies detect touch by measuring the capacitance at each addressable electrode. When a finger or a conductive stylus approaches an electrode, it disturbs the electromagnetic field and alters the capacitance. This change in capacitance can be measured by the electronics and then converted into X,Y locations that the system can use to detect touch. 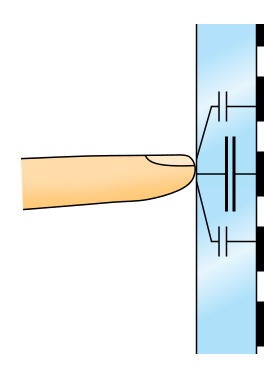